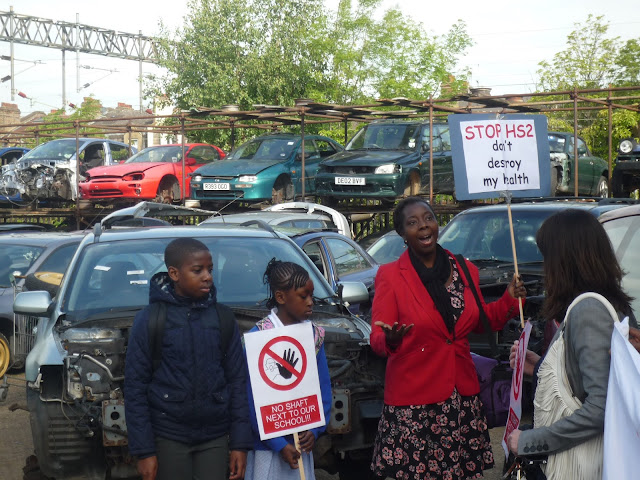 A funny thing happen to me over the weekend, I received a email from a senior officer in Brent council, telling me about a meeting to discuss the HS2 train link running under Kilburn and the placing of the vent shaft.

“Please accept this meeting request for discussions on the HS2 Vent Shaft issue that has arisen.

XXXX has called this meeting to ensure you all have the opportunity to be factually briefed on the issue, especially from the South Kilburn Regeneration perspective.

The meeting will be held at xxxxx. xxxxx (full address below). Please ask for XXXX XXXX upon arrival”.

I accepted the invitation to the meeting and believed I should inform the Chair of the local residents to highlight the fact that I was attending and therefore assuring them that their voice was being heard. So I forwarded the email to the Chair of the local residents a Mr F and merely added “FYI”. Believing that I had acted as a good councilor, I then prepared to enjoy my weekend.

However on Friday night I received this letter from a Senior Director, which he had cc the leader of the council. Saying that he noticed I had forwarded his email stating.

Dear Councillor Duffy,
This is a private briefing for the new MP, the Leader, and relevant Lead Members from the cabinet and ward councilors only. It isn't an open meeting for members of the public or wider party members. I would wholly expect one outcome of the meeting to be wider consultation and engagement on the issues and we can discuss the approach to this at the meeting.

Can I leave you to inform Mr F of this situation please?
Thanks - see you next week

I was initially taken back by what I saw of an invasion of my private correspondence with a Constituent. However it would seem that Brent council operate a system that traces any person to whom they have sent an invitation to and any other person that the recipient forwards it onto. This despite the fact that the email did not state it was private or secret.

Because of my concern about this I then forwarded this note to two other colleagues asking them to advise me about what I saw as intrusion into my private email correspondence with my constituents.

To my amazement I received another email from the Director, which was sent to all of the three of my constituents I had emailed. Which said:

I understand that you have been forwarded a notification of the above meeting by Cllr Duffy.

Regrettably this meeting is a private briefing for local politicians and therefore attendance is restricted and I am afraid that you won't be able to attend.

One of the purposes of the meeting is to discuss how we best engage and consult with the many different residents and partners who have an interest in this issue with a view to ensuring that everybody's voice is heard.  I will make sure you are all notified of the relevant consultation meetings when they are set up.

Many apologies for the misunderstanding.”

It is clear the officer involved believes he alone controls the meeting; his way of dealing with councilors is by dictating to them and believes he can instruct councilors to obey him, because presumably he is an officer

The way the officer has handle this situation and the tone of his emails is of great concern to me, it reeks of “big brother ” and his interference by directly emailing my constituents is frankly unbelievable. It is as if I had been a very “ bad boy “ and he is telling me off. It is condescending and I believe undermines the respect officers should show to elected representatives.

I am sure there are many Cabinet Members and Councilors, who believe they should just obey officers’ instructions and do what ever they say, and do not stand their ground. This officer seems to have confused me with one of them.

I was quite happy to attend the meeting itself. I never invited anyone else contrary to the officer’s wild allegation. This meeting is about the vent shaft for HS2.  There are two options being discussed: one in Queens Park  (next to the station) and the other in South Kilburn next to St Mary’s RC School in the middle of the regeneration area that has been blighted as a building site for the last nine years.

I however do not accept the implicit suggestion from these officers that this will be sited (as indicated in their first e-mail) in the South Kilburn regeneration area. These residents have lived on a building site for last 9 years and have been shafted by the Tory government over the years by cuts in services, the bedroom tax and family credits etc. So I will attend the meeting to do my best to ensure the residents of South Kilburn are not literally “Shafted” again by both the Tory Government and over zealous Officers.